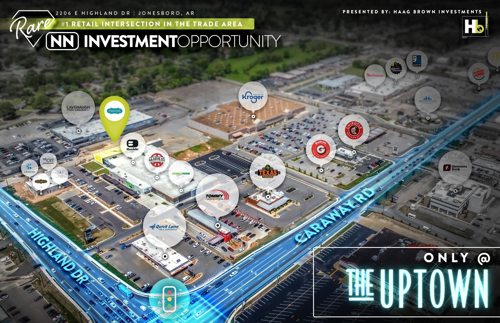 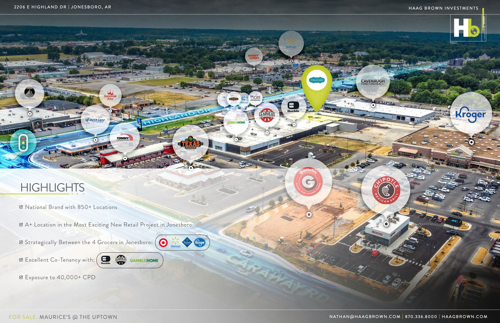 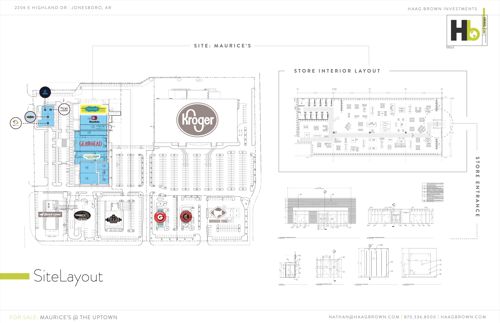 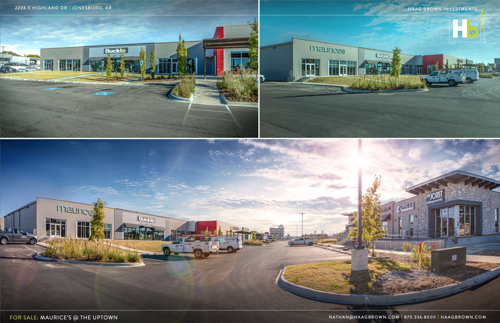 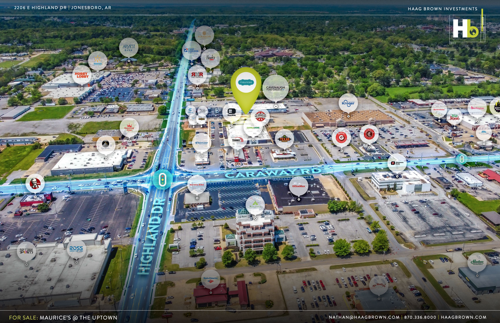 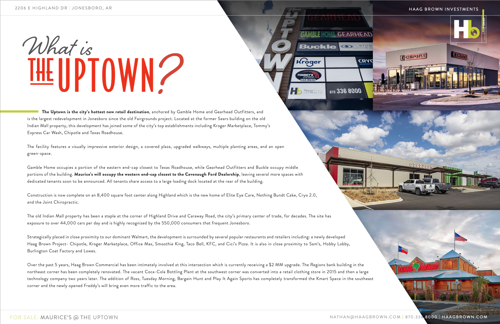 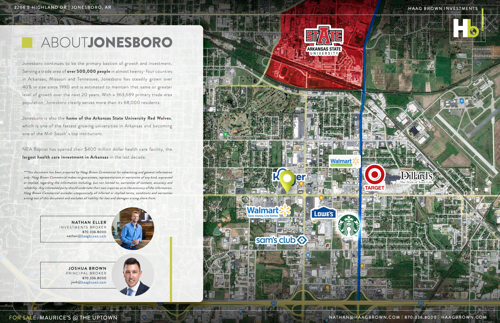 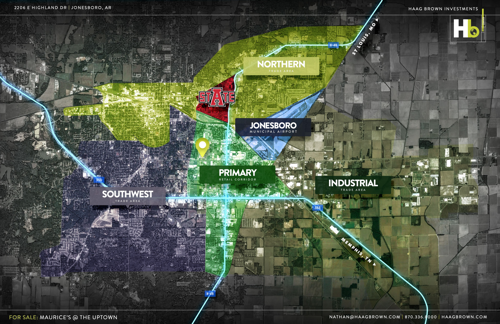 Highlights
Property Description
The Uptown is the city’s hottest new retail destination, anchored by Gamble Home and Gearhead Outfitters, and
is the largest redevelopment in Jonesboro since the old Fairgrounds project. Located at the former Sears building on the old Indian Mall property, this development has joined some of the city’s top establishments including Kroger Marketplace, Tommy’s Express Car Wash, Chipotle and Texas Roadhouse.
The facility features a visually impressive exterior design, a covered plaza, upgraded walkways, multiple planting areas, and an open green-space.
Gamble Home occupies a portion of the eastern end-cap closest to Texas Roadhouse, while Gearhead Outfitters and Buckle occupy middle portions of the building. Maurice’s will occupy the western end-cap closest to the Cavenaugh Ford Dealership, leaving several more spaces with dedicated tenants soon to be announced. All tenants share access to a large loading dock located at the rear of the building.
Construction is now complete on an 8,400 square foot center along Highland which is the new home of Elite Eye Care, Nothing Bundt Cake, Cryo 2.0, and the Joint Chiropractic.
The old Indian Mall property has been a staple at the corner of Highland Drive and Caraway Road, the city’s primary center of trade, for decades. The site has exposure to over 44,000 cars per day and is highly recognized by the 550,000 consumers that frequent Jonesboro.
Strategically placed in close proximity to our dominant Walmart, the development is surrounded by several popular restaurants and retailers including: a newly developed Haag Brown Project- Chipotle, Kroger Marketplace, Office Max, Smoothie King, Taco Bell, KFC, and Cici’s Pizza. It is also in close proximity to Sam’s, Hobby Lobby, Burlington Coat Factory and Lowes.
Over the past 5 years, Haag Brown Commercial has been intimately involved at this intersection which is currently receiving a $2 MM upgrade. The Regions bank building in the northeast corner has been completely renovated. The vacant Coca-Cola Bottling Plant at the southwest corner was converted into a retail clothing store in 2015 and then a large technology company two years later. The addition of Ross, Tuesday Morning, Bargain Hunt and Play It Again Sports has completely transformed the Kmart Space in the southeast corner and the newly opened Freddy’s will bring even more traffic to the area. 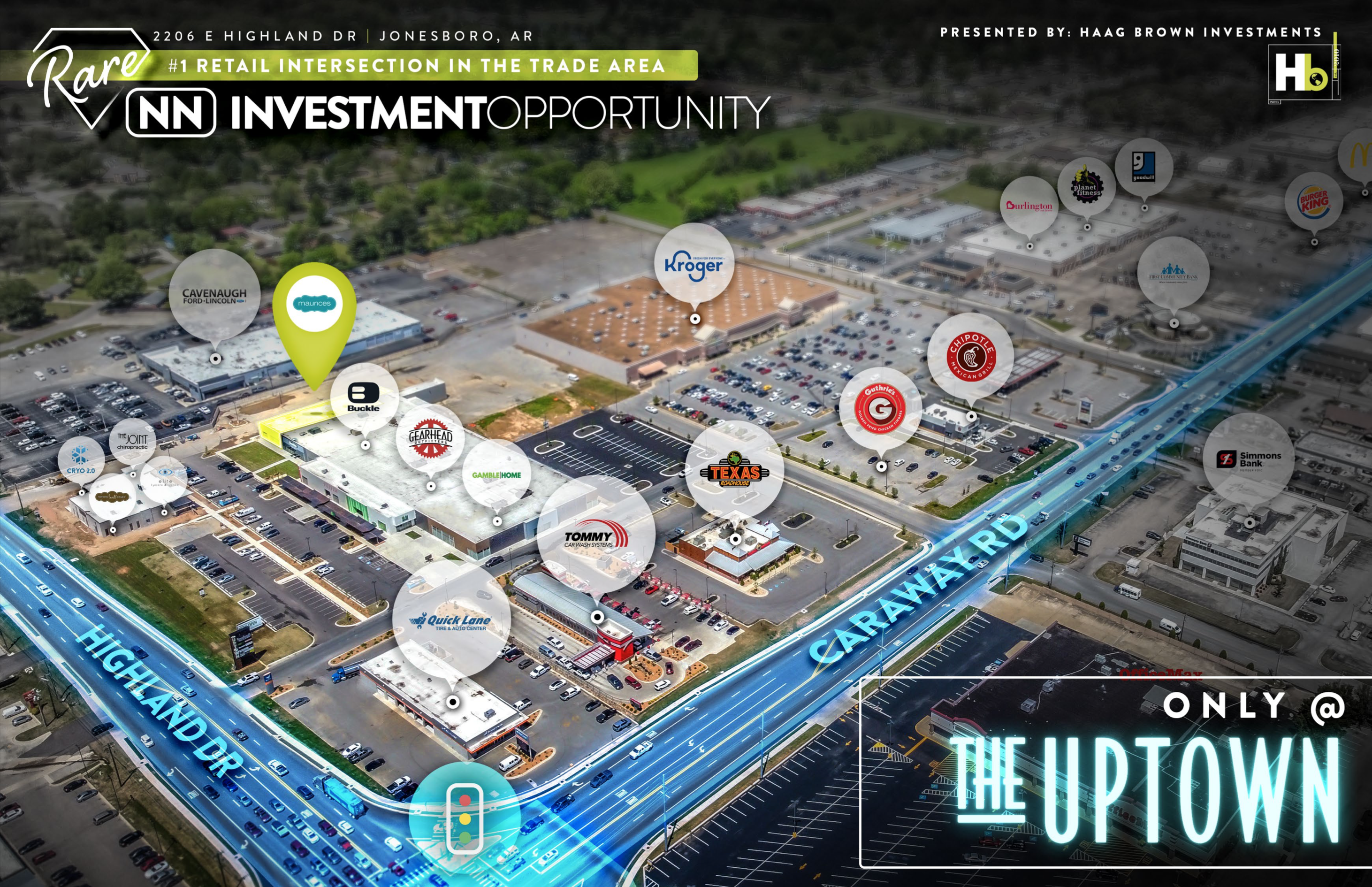 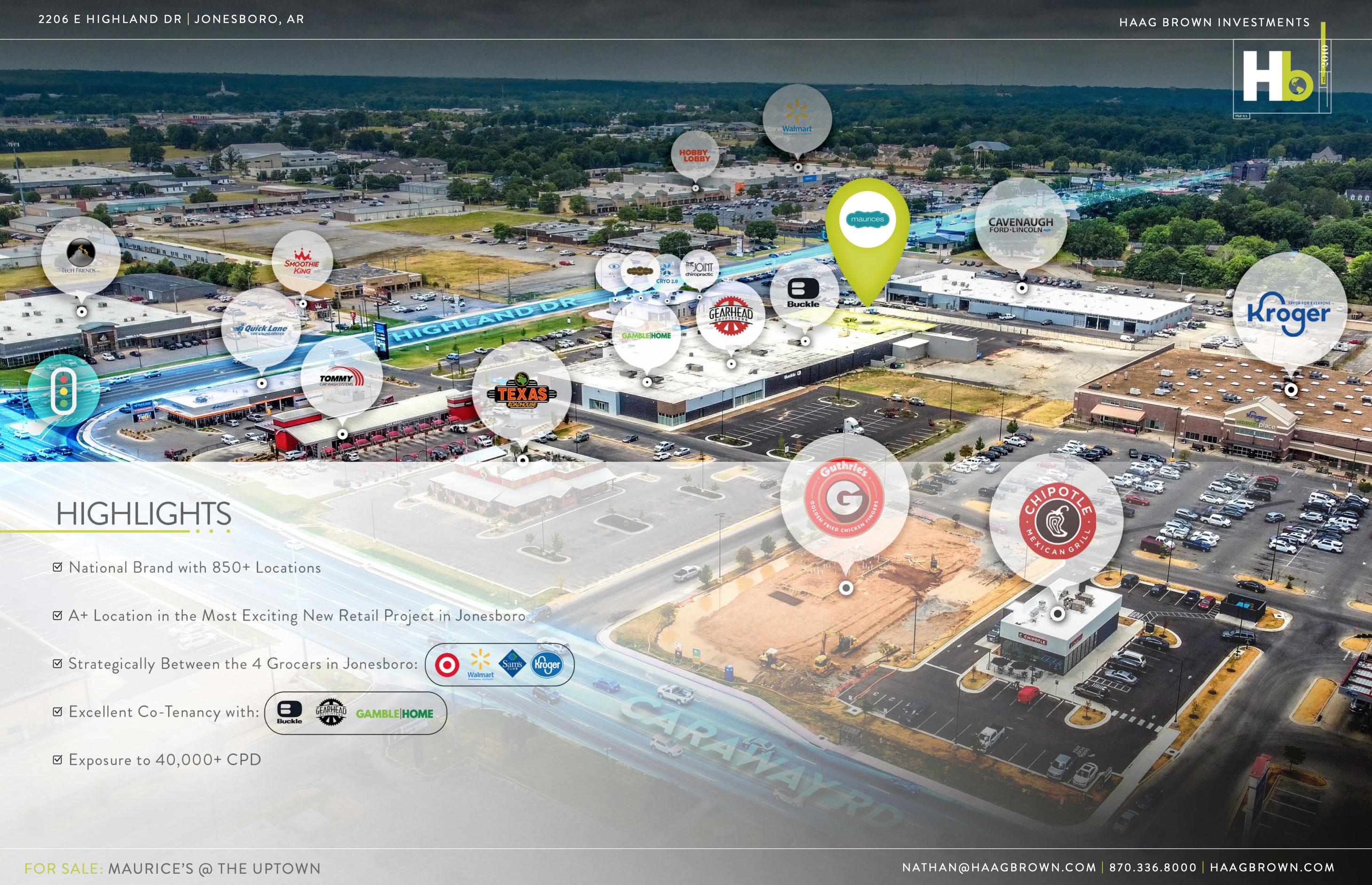 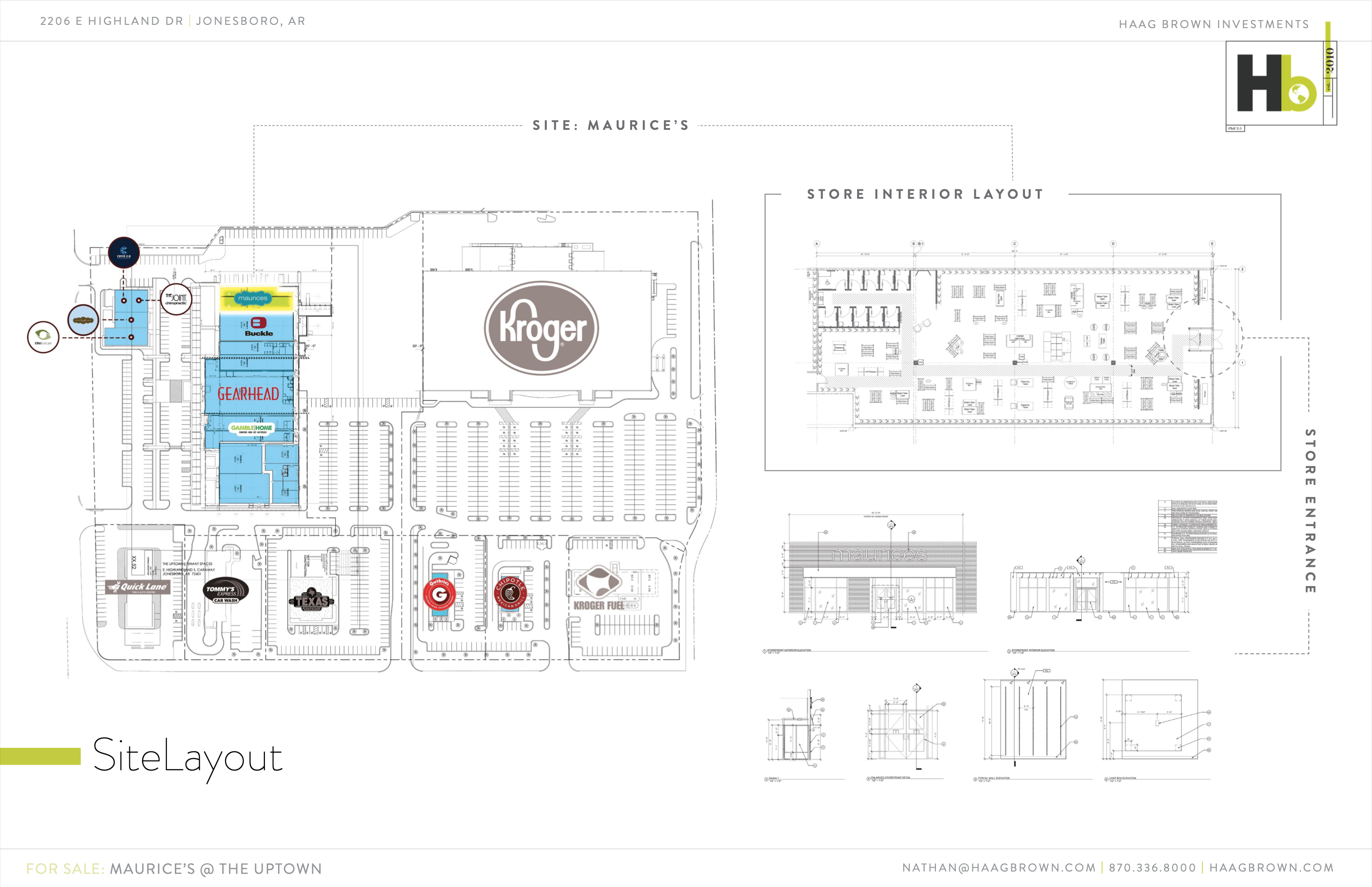 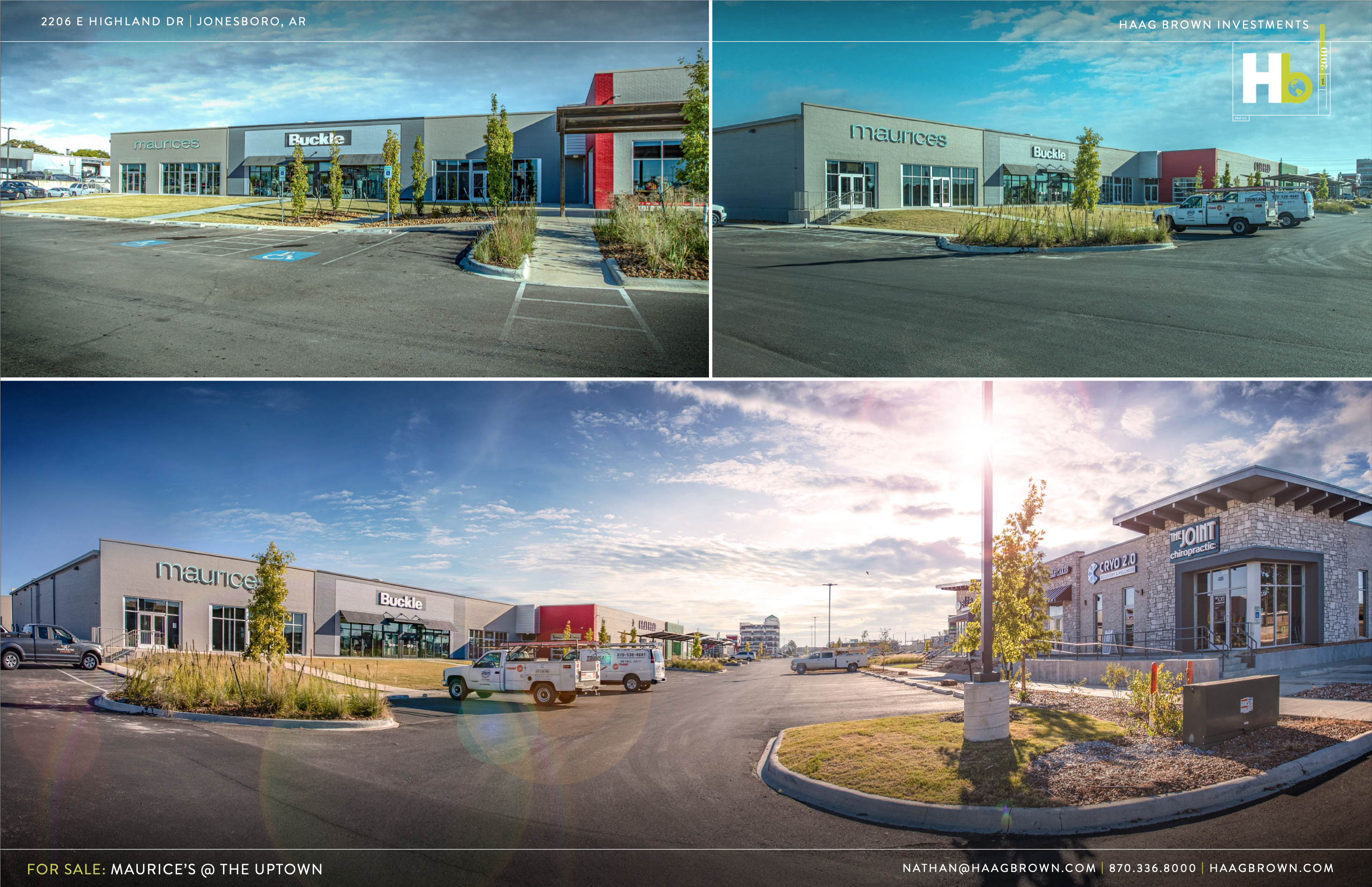 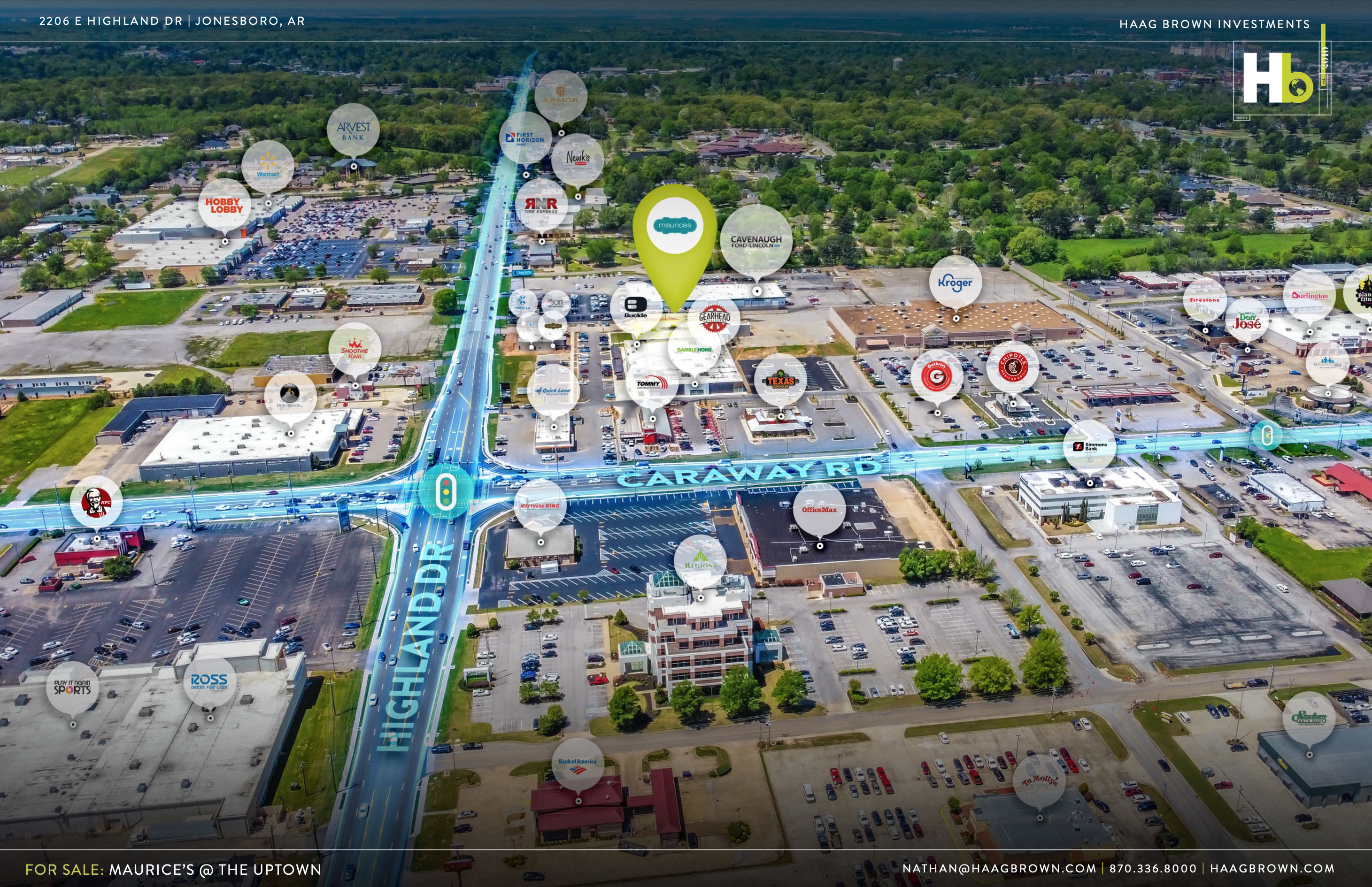 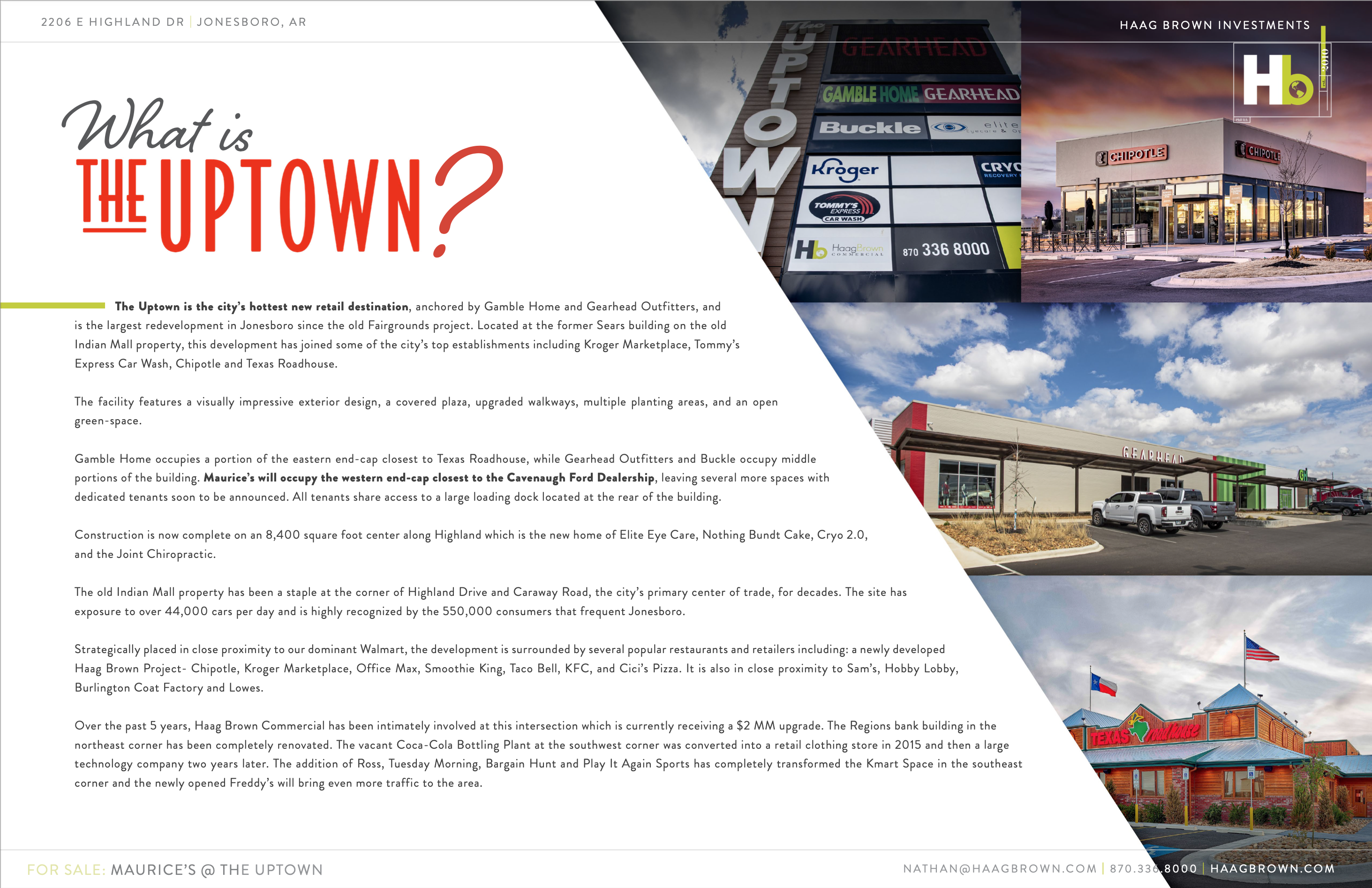 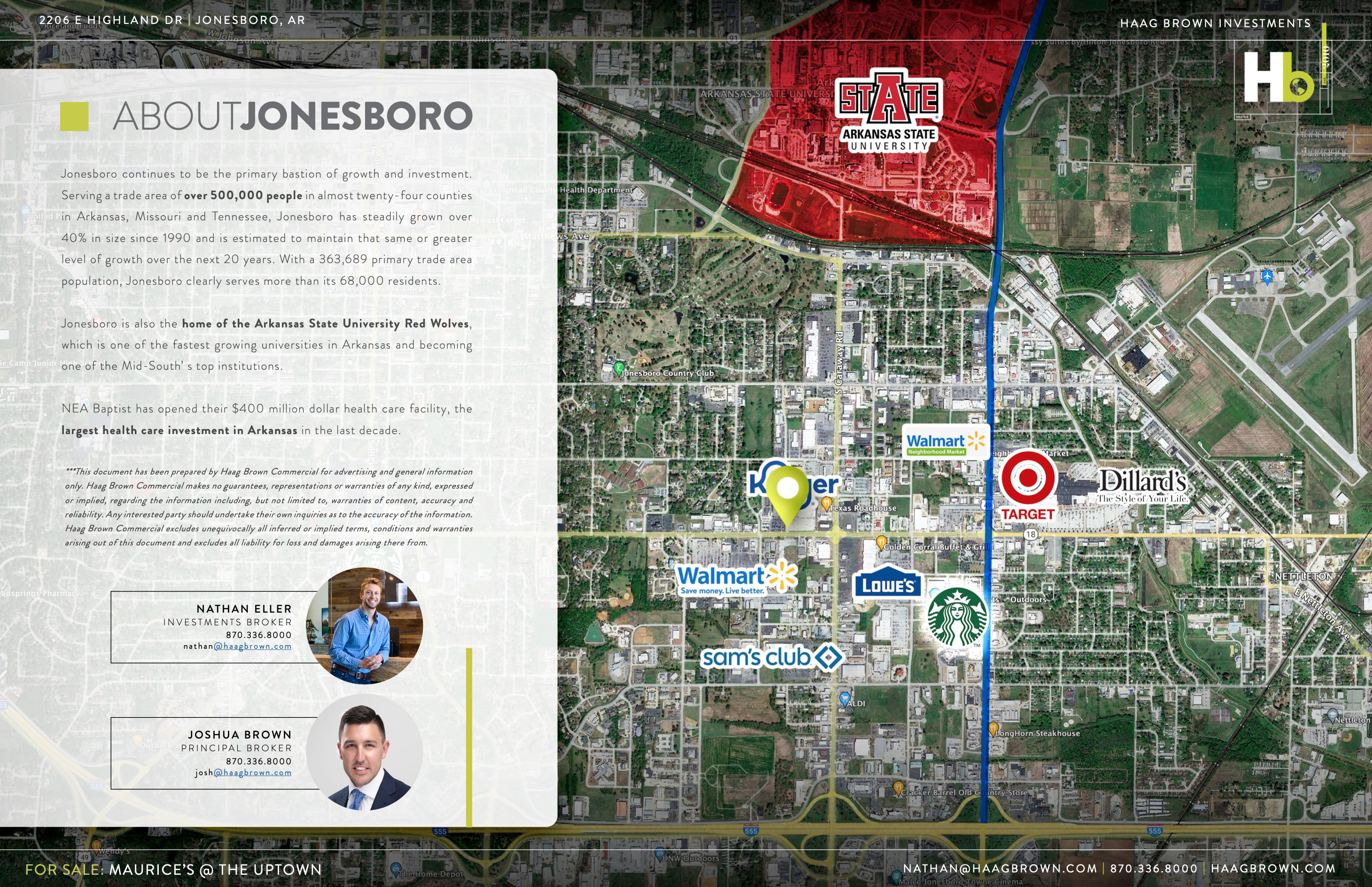 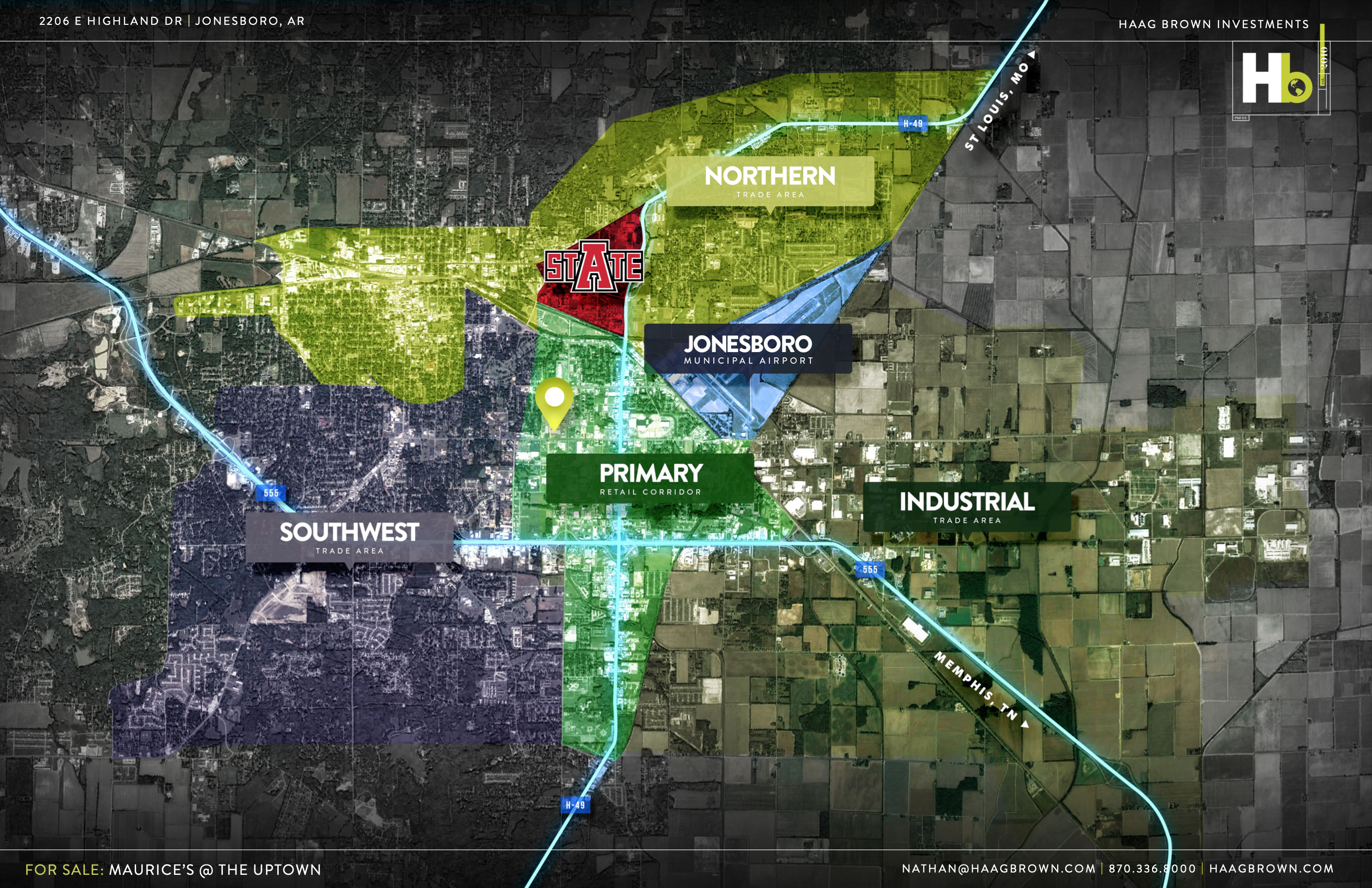 Now the birth of Jesus Christ took place in this w

Haag Brown is excited to announce that the WW Quic

HB is excited to #announce that we’ve got another former Mall at Turtle Creek tenant coming back to Jonesboro: Maur… https://t.co/ptVufQoKMW
h J R
@haagbrown

When the "Coming Soon” sign is up, it becomes a bit more #official! 😱 HB is excited to share that KPOT, a unique Ko… https://t.co/8I4BD2HpA7
h J R
@haagbrown