News Articles
Three Funding Sources Might be Causing Quality of Life Gap
May 14, 2019 by Haag Brown in News Articles

JONESBORO, Ark. (KAIT) – We looked at similarities between Jonesboro and Fayetteville, but it ended with one major difference in quality of life. For some community members researching the gap, it brought up several different funding sources that may be keeping Jonesboro so far behind. Taxes are almost never a welcome topic.

That goes for Haag Brown Commercial’s Co-Founder Joshua Brown too, but after looking into how much less Jonesboro is taxed compared to similar size cities, Brown is looking at it as an investment into quality of life. “That’s something I’ve been paying a lot of attention to lately and researching,” Brown said. Dissatisfied with the gap between Jonesboro and comparable size cities, he’s made it his mission to figure out. “We’re just so far behind everybody,” Brown said.

For Brown, it’s turned into a matter of quality of life and cost of living. He’s narrowed it down to three primary sources of funding. “To do things that people would qualify as a cool area to hang out, or trails, or a water park,” Brown said. First, the Advertising and Promotions Commission budget, generally made up of a hotel tax, bringing in more than $660,000 in 2018 for Jonesboro, and a restaurant tax, the dominant half for other comparable cities, like Fayetteville, North Little Rock, and Conway, but nonexistent in Jonesboro. And it’s a percentage that Brown said restaurant owners he’s talked to would view the same as hotel owners do their tax. “A small price to pay for an increase of their overall occupancy,” Brown said. Second, a sanitation fee.

What is typically a monthly fee of about $10 to $15 per household, in Jonesboro, the city foots the bill. “I’ve not found a city that does that,” Brown said. Last, city sales tax. “We’re lower than any of the comparable cities I could find,” Brown said.

Jonesboro is significantly behind other comparable cities in city sales tax. (Source: KAIT-TV) Jonesboro sits at 8.5%, significantly behind Fayetteville’s 9.75%, North Little Rock’s 9.5% and Conway’s 9.125%. “All three of those areas are taking up dollars or we’re missing dollars that could be spent on another Craighead Forest Park on the north side of town, a city museum, an aquatic center, a big entertainment venue, or water park,” Brown said. They are amenities that Fayetteville resident Clinton Bennett has seen first hand help in recruiting talented employees. 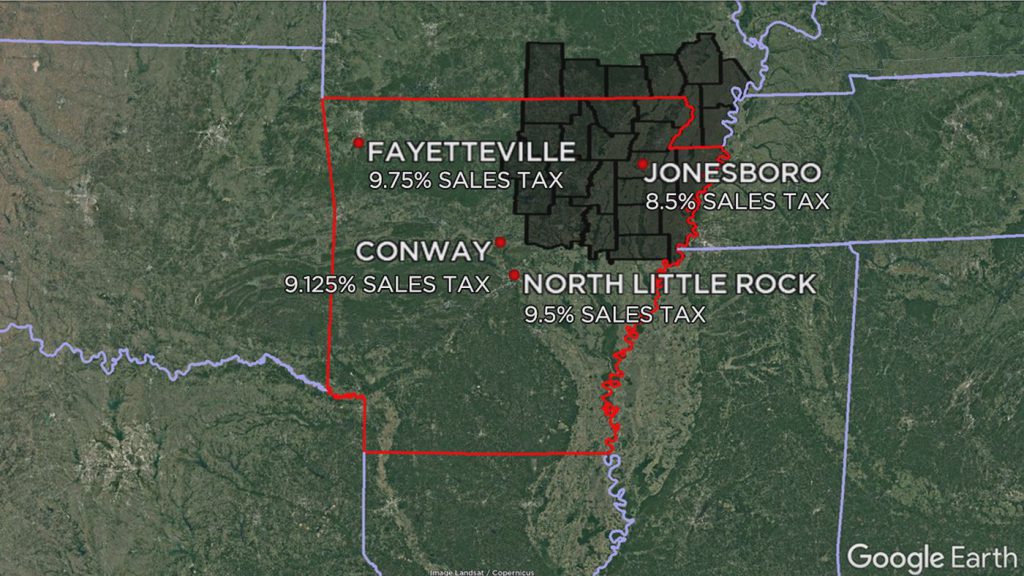 “We show a lot of office space,” Bennett said. “And we have people now, one of the questions they ask is how close are we to the trails.” But, they are amenities that come at a cost. “The counterpoint of that is the tax burden is real,” Bennett said. “I’m anti-tax and conservative,” Brown said. “But, it’s so clear for me to see.” Brown said the taxes make even more sense in Jonesboro because of how regional the city is, meaning a large portion of the money that would be generated by the taxes would really come from people living in surrounding communities. “There’s more people from outside of Jonesboro that spend money in Jonesboro than actual Jonesboro citizens,” Brown said. “So, it’s like we get to build a $5 million aquatic center, but we only paid for $2.5 million of it.” It’s the exact same conversation had at an A&P Commission meeting just last month.

“That’s what’s on people’s minds,” Brown said. “What can we do to help the quality of life?” And with so many seemingly on the same page, Brown said there’s nothing left but to take action. “We have to start doing some of those things now,” Brown said. “If we don’t invest in our city, nobody is just going to come in and do this stuff for us.” Region 8 News also reached out to the mayor’s office for Mayor Harold Perrin’s opinion of how much of an impact these funding sources could have and if there is any chance these taxes will be proposed in the future, but they declined to comment.

Haag Brown Commercial would like to say thank you

Former Mall Tenant Coming to The Uptown In March,

"Let us not become weary in doing good, for at the

🏆Most of you are familiar with the "best of" aw

🎂 The entire HB staff would like to send our Fi

🏆Most of you are familiar with the "best of" awards from local media outlets. In honor of that, we would like to pr… https://t.co/mtEvPFdQO8
h J R
@haagbrown

Starbucks is bringing their newest, drive-through only prototype to Hilltop! 🥳 The cool, free-standing store will b… https://t.co/OdSZzpE89I
h J R
@haagbrown

You may be thinking 💭 to yourself, “It’s been a while since I’ve heard anything about the new Krystal.” 🤔 Rest assu… https://t.co/6vmp0MkP90
h J R
@haagbrown

Chipotle! That’s the 🆕 announcement from HB! HB is developing Chipotle's newest prototype WITH A DRIVE THRU 🚗 in f… https://t.co/KHro6PafMc
h J R
@haagbrown