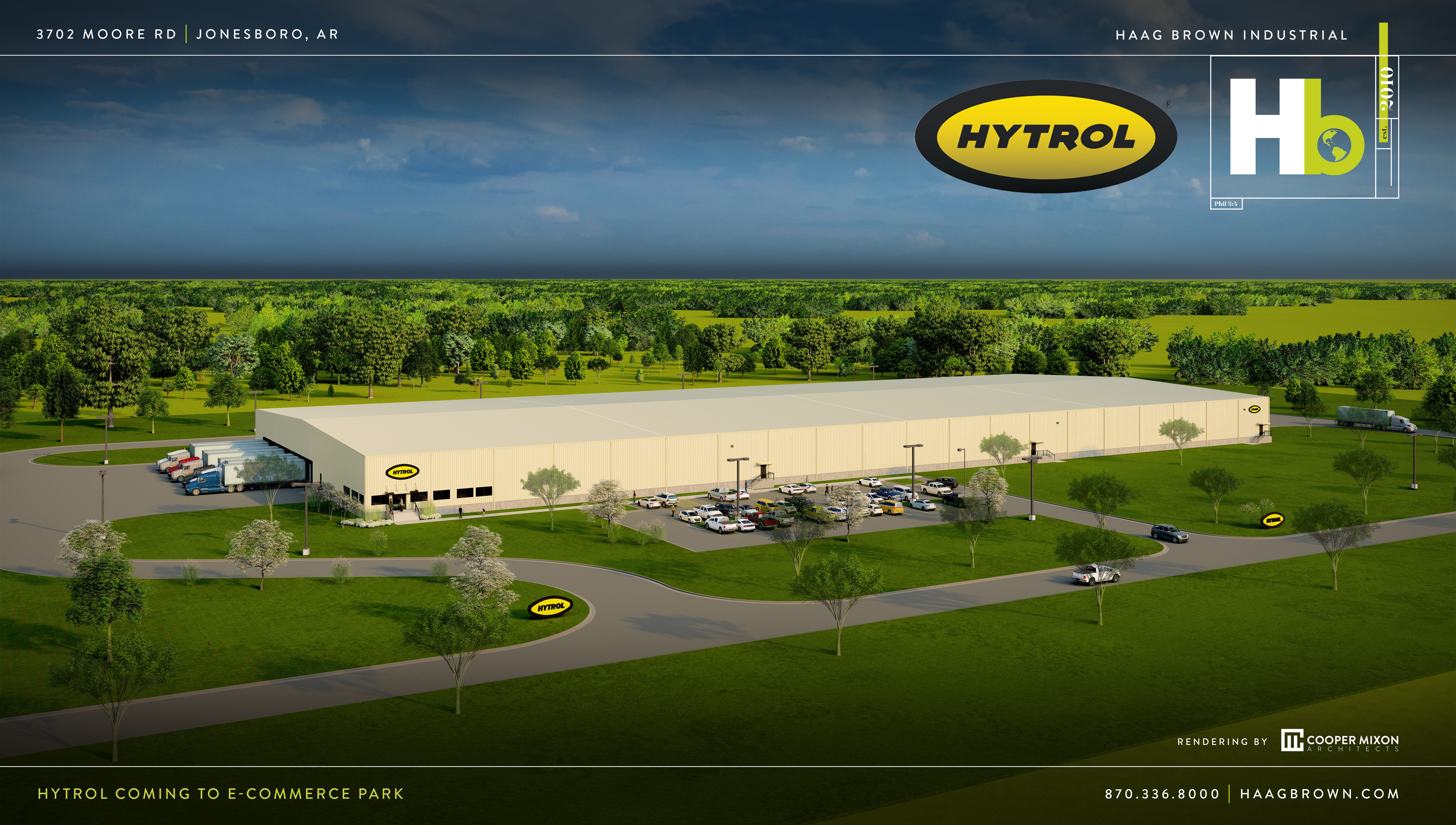 Hytrol Conveyor Company Inc. and Haag Brown Industrial through its holding company, Real Estate for E-Commerce, LLC, have partnered on a new warehouse and distribution center at the new ultra-modern E-Commerce Park.

This 150,000 square foot state-of-the-art facility will provide easy access to Interstate 555 and will serve as Hytrol’s main warehouse.

The eight-figure investment by Hytrol and Haag Brown provides the critical first step for the community to help ensure the needs of local industries are met, while also securing and creating more jobs. The lack of local availability of these types of facilities can force industries within the Northeast Arkansas market to go outside the region to fulfill their needs.

Our company is growing rapidly, and we require a larger warehouse facility. By selecting to be a part of the E-Commerce Park, we will be consolidating from three warehouses to one and removing extra equipment from our main plant.
David Peacock
President, Hytrol Conveyor Company Inc

Hytrol is the first company to sign a lease in the E-Commerce Park. The park is located at the gateway into Jonesboro’s industrial market and will provide up to 3 million square feet of logistics, warehouse, and manufacturing space. In addition, it is within one hour’s drive of Memphis, Tennessee, which is the nation’s primary distribution hub, and America’s largest steel-producing district.

“It is important for us to show our dedication and commitment to Northeast Arkansas,” stated Vice President of Corporate Development Bob West. “The creation of this center will serve not only to benefit Hytrol but the surrounding area as well.”

The facility will indirectly create space for functions within the Hytrol facility for growth in its administrative functions, including its panel shop and non-manufacturing support activities that include the company’s engineering department.

Ramsons Inc. will be heading up the project. Ramsons has worked previously with Hytrol, the most recent project being Hytrol’s Silver Cell expansion.

“One of Hytrol’s slogans is, “Hytrol leads the way”. And it’s no surprise that Hytrol is leading the way with this exciting e-commerce development,” said Vice President of Ramsons, Inc. Scott McDaniel. “They are used to being the first and are quite comfortable in that position. Hytrol has been one of Ramsons’ most valued clients since the earliest days of our company —this project will be the 110th that we’ve built for the firm. We are excited to be on the team.”

“This project would’ve been impossible to pull off without the hard work of our design team, Jason MacDonald at Fisher Arnold (civil engineer) and John Mixon/Tim Cooper at Cooper Mixon Architects,” McDaniel adds. 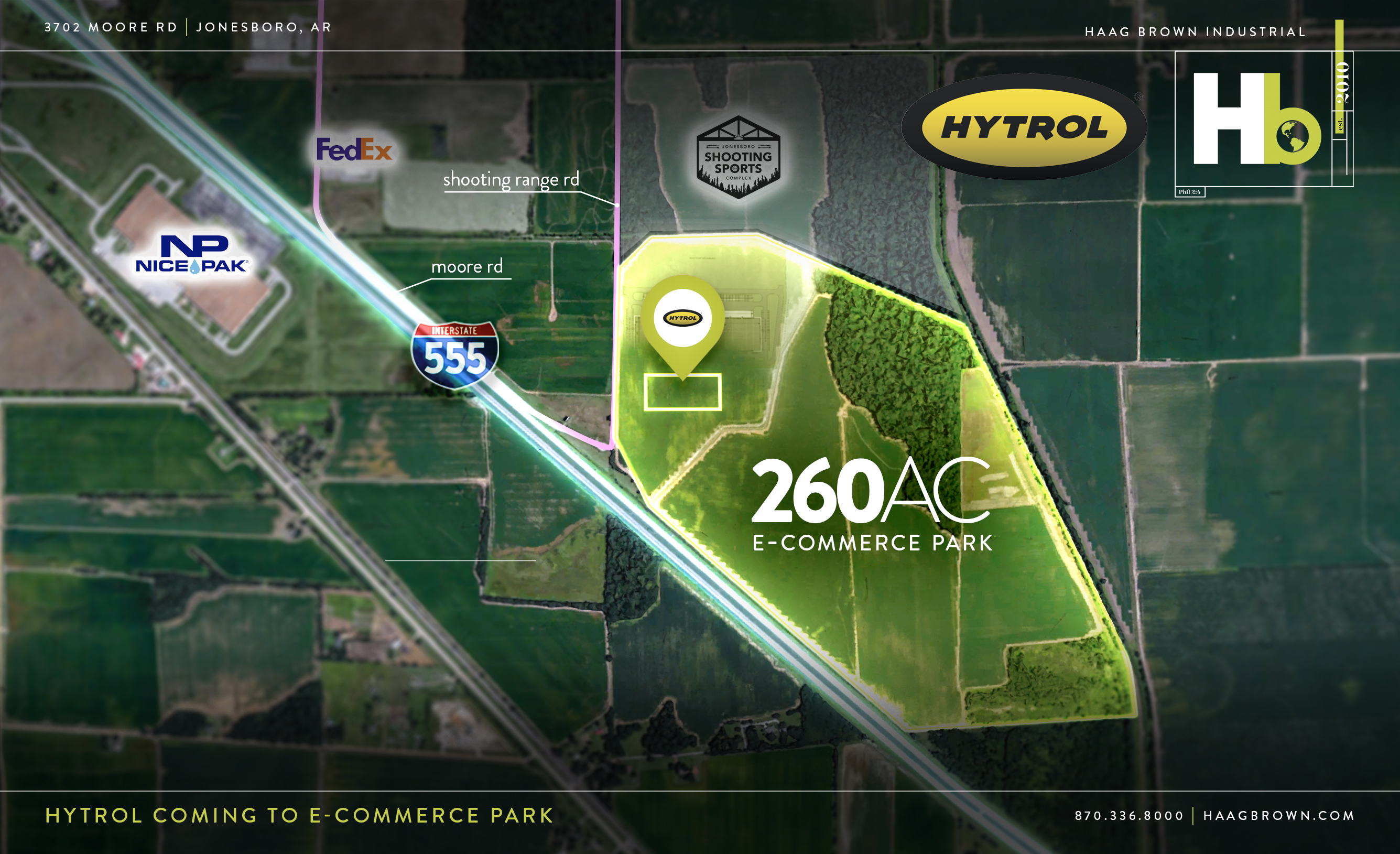 The partnership between Hytrol and Haag Brown happened naturally, with both companies being headquartered in Jonesboro—Hytrol for 60 years and Haag Brown since its inception in 2010.

“Haag Brown has demonstrated success and is well known throughout Arkansas,” said West. “The decision to partner with HB was an easy choice. We knew they would deliver, and we quickly got to work.”

The new warehouse facility is set to break ground in late June with an official ceremony held at 8:00 a.m. on June 24. The facility will be complete for operation in spring 2023.

Hytrol Conveyor Company Inc.
Hytrol Conveyor Company, Inc. is a world leader in the design and manufacturing of material handling systems for a variety of industries. Since its founding in 1947, the company has been dedicated to pushing forward the material handling industry. Hytrol moved to Jonesboro, Ark. In 1962, where the company headquarters remain today, and expanded in 2021 to include a second production facility in Fort Smith, AR.

We have 1 EXCLUSIVE WATER FRONT lot and a couple o

It is only a matter of days before Nothing Bundt C

HB Construction Update :: 🚧 If you haven’t be

FOR SALE : High Profile Self Storage Facility If

HB Construction Update :: 🚧 No, your eyes are n